I never thought I would post something with that headline. Yesterday at Microsoft’s annual //Build conference for Developers in San Francisco we were treated to the usual high quality glitzy round of announcements and demonstrations.

From new Cortana power to some great innovative technology assisting people who cannot see to understand the environment around them. All this was very much focussed on developers and getting all manner of developers to write programmes (I still don’t like saying Apps) for the Windows ecosystem using the Universal Windows Platform. This enables us to use one application on ANY type of Windows 10 device, whether it be a raspberry Pi or an 80” Surface Hub, or even the purely magical HoloLens (which started shipping yesterday).

Having listened carefully to industry insiders over the last few weeks , the rumour and speculation about what was going to be announced included all sorts of wild things like PowerShell on Linux.

One thing Terry Myerson did announce is that there will be an Anniversary update for Windows 10 this summer and it will be free for all users (all 270 Million of them so far).

This update will include a whole host of new innovative and quite frankly excellent features, from more Cortana integration, to Biometric log in to web sites using Edge, imagine that NO MORE remembering all those Amazon, Netflix or other online site passwords and usernames. Simply swipe your finger or look at the screen and Windows Hello will log you in.

All of this is cool and exciting but the real biggie is that Microsoft did not announce PowerShell on Linux (yet, who knows if that is in the pipeline).

But they did announce Linux on Windows!

Well actually to be more accurate the Anniversary update will include a Linux subsystem that will allow Linux command line tools to run natively inside a Windows 10 PC. This sparked a number of Twitter spikes for and against.

I am confident that the new Microsoft led by Satya Nadella is about as open as its possible to be, both in what we do well and what goes wrong (See Tay our new AI bot for Twitter), but more importantly open in the sense that if you have something blocking you from moving to the Windows ecosystem as a Developer then it seems that we will move heaven and Earth to help you.

The Bash Shell will be fully functional on Windows 10 allowing all those developer who know and love that command language that has been on the scene since 1989. For those interested it stands for Bourne-Again SHell (Bourne was the shell it replaced). 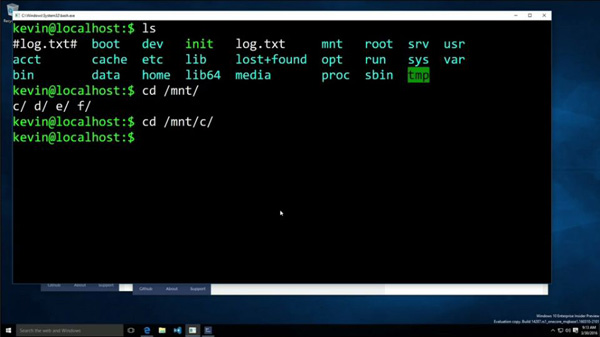 This will allow many more developers and IT Pros to use commands they know from Linux tools directly on their Windows 10 PC. Read all about it here.

And if you want the Skinny direct from Ubuntu, Dustin Kirkland from Canonical writes about it here

For real Geeks this is based on Ubuntu 14.04 and should be available to insiders within a couple of weeks and will then be upgraded to Ubuntu 16.04

Now PowerShell fans may argue (and they do) that we don’t need Bash, we need a more developed PowerShell, I simply direct those to the mission of Microsoft under Satya.

It Pros and developers absolutely know what they want, know when they want it and know how they want it implemented. If there is a blocker to doing business and they can carry on using what they are currently using without detriment to themselves or their employers business then that is exactly what they will do.

By integrating Bash into Windows and working with Canonical (who distribute Ubuntu) to make it work Microsoft have shown that whatever it takes to help people use the tools they want to use to deliver their hard work on the Windows platform will be considered and often implemented.

Another example of this is the use of GitHub the open source code repository to distribute PowerShell module updates.

For the first time yesterday I installed an Azure Module (1.3.0) from GitHub directly. Even the source code is there.

Now that is open for you. So if you are a Linux guru and want to start using Bash on Windows, watch this space for the Anniversary update, coming your way soon.

If you aren’t an insider already – sign up here

For more of the announcements at Day 1 of /Build check here.